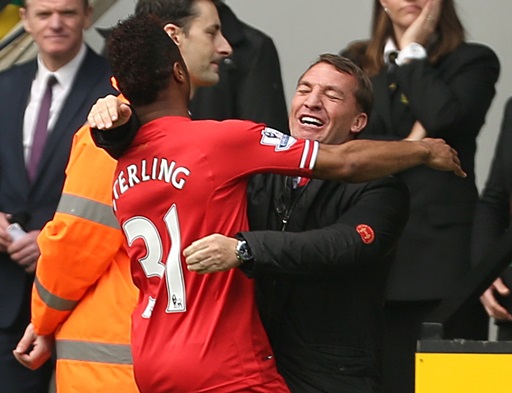 “Love lift us up where we belong, where the Eagles cry…on a mountain high”

Liverpool motivator Brendan Rodgers has been eulogising about his fearless group again, this time reserving special praise for one Raheem Sterling, who Rodgers has noticed blooming from a wide-eyed young kid into a beautiful teenage heartthrob – a teenage heartthrob with a classy way of walkin’, a sassy way of talkin’ and, much more importantly, an identity of his very own.

“Something we said to Raheem when he first broke into the team, and something we’ve reiterated, is that you have to have an identity as a player.

“The identity he has is to score goals and create goals. That’s what the job is.

“He scored 10 goals last year and this kid is only going to get better. When you’re so young, it’s important to understand exactly what your role is.

“Not just look good, you have to be efficient and effective. His development has gone to a new level. He’s way above the level from when he first came in.”

Then things started getting a little hot and heavy, as Rodgers continued to gush:

“Tactically, technically, and what has been beautiful to watch with Raheem has been his maturity.

“He’s turning into a beautiful young man, with all the responsibility. He’s taking it all in his stride and now he’s in a good place with every part of his game.

“It’s just about maintaining that commitment to his work. He’s still only 19, but in big games he’s performed and he’s a wonderful talent.”

Oh Jesus. Someone get this guy a hot towel before he busts a gasket.