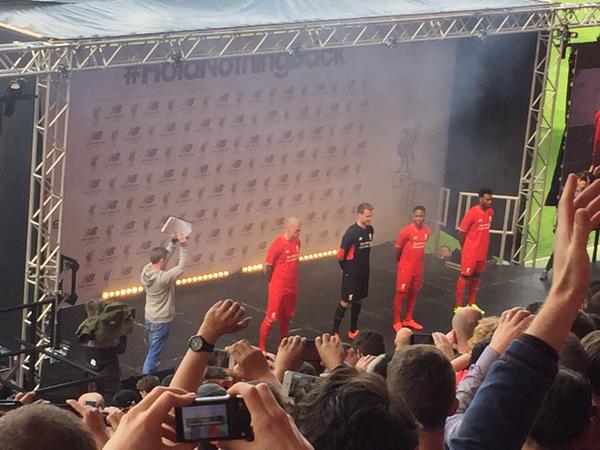 After enduring several waves of retina-bruising strips from Warrior, Liverpool (as of 2015/16) are in kit cahoots with New Balance, who are currently in the process of adding more and more names to their burgeoning football portfolio.

To that end, New Balance got round to launching Liverpool’s brand new kit today, teasing the event with a slew of whistle-wetting press releases and the like.

The understated launch was a far cry from their 2014/15 event, which the club head down to the docks and have several players reveal their new Warrior strip by emerging from a large shipping container.

This time round a modest crowd of around 1,000 interested parties filed into Anfield to watch a local radio DJ and Liverpool ambassadors Robbie Fowler and Ian Rush do the honours.

This is it in all its glory… Hardly the most exciting kit we’ve ever laid eyes on, but perfectly smart none-the-less.

It’s red. About as red as it could possibly be.

What’s the verdict Pies fans, yay or nay (or meh)?