Watford made it four league wins in a row courtesy of a superb 3-0 win against a limp Liverpool at Vicarage Road on Sunday, a result which sees the Hornets just a point off the top four. 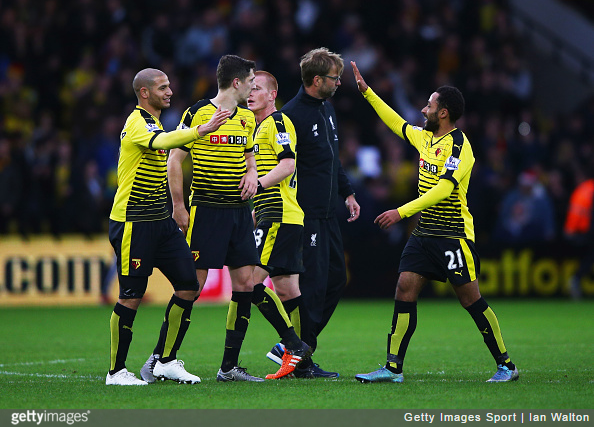 The visitors started with Adam Bogdan in goal, replacing the injured Simon Mignolet, and it was the Hungarian who would hand Watford their opening goal after just three minutes. With his very first touch of the game, the Reds’ keeper dropped a simple cross from a corner, allowing Nathan Ake to prod home. However, to be fair to the ‘keeper, he did look to have both hands back on the ball when Ake struck.

Jurgen Klopp’s men were far from their energetic best and went 2-0 down on 15 minutes, when in-form striker Odion Ighalo outmuscled Martin Skrtel before firing past Bogdan. The visitor’s lethargic display would continue into the second half, with the Hornets once again the far better side. On 85 minutes, the superb Ighalo headed home to grab his brace and secure an impressive win.

While Quique Flores’ side go seventh, Klopp’s Reds are four points back in ninth, courtesy of their third top-flight game without a win. With the initial energy from his appointment at Anfield now dissipating, the German has quite a job on his hands to lift his side into the European spots.