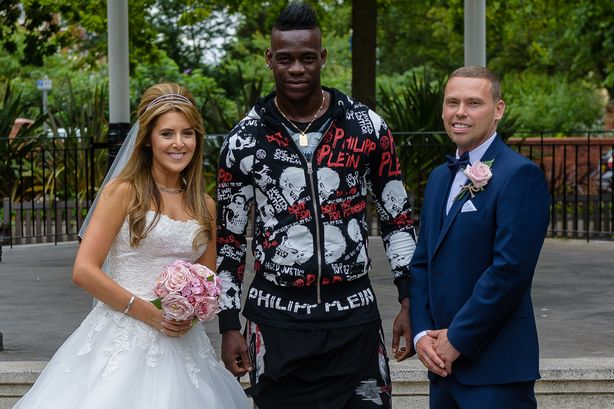 Photo via Empire of the Kop

Having been informed that henceforth he’s most definitely surplus to requirements at Liverpool, Mario Balotelli has taken to loitering outside hotels on Merseyside.

While frittering away a few leisurely hours in Southport, Balotelli was approached by a couple outside The Vincent Hotel and asked for a photo. Nothing untoward about that, you might think.

However, it just so happened that the couple in question, Vicky and David O’Leary, were celebrating their wedding day, leading to this particular arrangement…

A couple got a surprise visit from Mario Balotelli who ‘crashed’ their wedding photos :D pic.twitter.com/hLgJeDslkf

He (Balotelli) asked them (the newlyweds) if they’d had a nice day, and said ‘I bet you’ve had loads of photos taken today’.

Also the bridesmaids told him that he smells gorgeous!

The couple said he was really nice and friendly, and more than happy to have photos taken with them, which made their day with them being such big Reds fans.

It was the icing on the cake.

Sign off with a top drawer wedding pun. Nice.