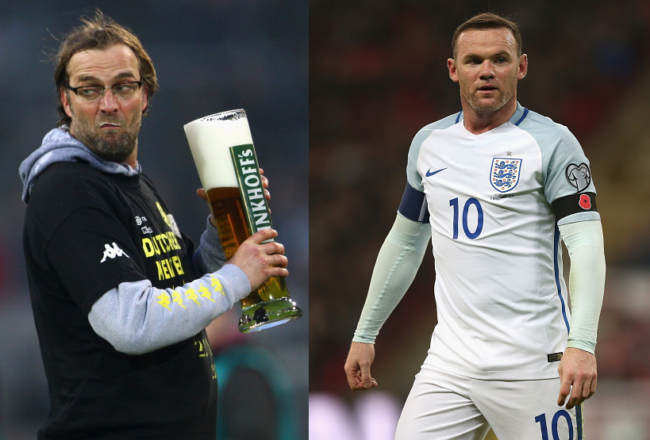 Jurgen Klopp has had his say on the Wayne Rooney non-issue that refuses to go away, with the Liverpool manager defending the England captain’s extra-curricular night on the sherbert.

Rooney duly apologised to all and sundry after being photographed looking a little bleary at a wedding reception the night after England’s recent 3-0 win over Scotland.

Speaking at his Friday press conference, Klopp was asked for his two penneth on the matter:

I feel for the players. We are all on the sunny side of life, earn a lot of money, do the job we love, but in the end there is a human being behind the kid.

Sometimes we are invited to something – a wedding, a birthday – we can still play the professional role and say ‘no, we don’t drink’ and ‘if you smoke, please, 20 yards between me and you’. That’s not how life works.

Klopp then went on to add that by modern standards, the ‘unproffesionalism’ of some of the most gifted players of all time would be considered nigh-on beastly:

This generation is the most professional generation of footballers we’ve ever had. All the legends you still love, all the guys you still admire drank like devils and smoked like crazy and were still good players. Nobody does it anymore.

It’s all about timing. When you are in the wrong moment at the wrong place it’s not good, but I’m pretty sure it was not really serious.

The not-so-nice part of our life is that all we do sounds like a big catastrophe when it’s not perfect. And it isn’t.

Robert Prosinecki smoked like a forest fire and Des Walker was supposedly on 20-a-day for most of his career.

It’s positively GOOD for you!