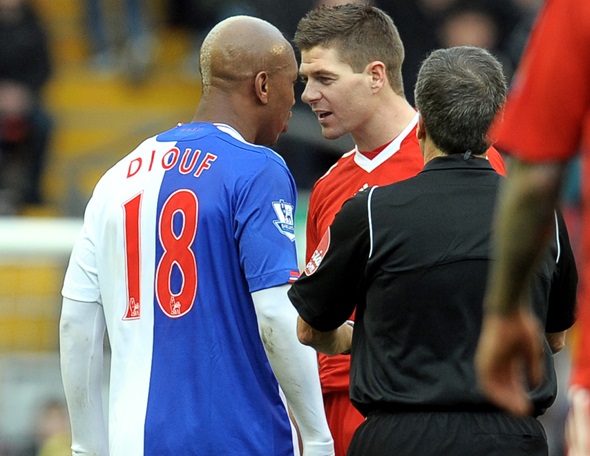 As the great and the good of the football world lined up to lavish Steven Gerrard with praise on his retirement, it should come as no surprise that there was one lone voice of dissent amid the din.

That voice, you might have guessed, belonged to El-Hadji Diouf, who has seemingly made it his life’s work to chastise Gerrard and fellow former Liverpool teammate Jamie Carragher at every possible juncture.

Appearing on ‘La Vestiaire’ on French channel SFR Sport, Diouf sat alongside Emmanuel Petit to discuss Gerrard’s career and kicked off his rant by grumbling.

People told me at Liverpool, there was some guys you could not touch, but I touched them. That is why it was complicated for me.

Petit then asked him if he meant Gerrard, to which Diouf replied:

I do. Stevie G and Jamie Carragher, the two Scousers.

I asked him to tell me in which big competition, Euros or World Cup, people think about him.

Here is the proof, even you cannot remember.

You are talking about Euros and World Cup. Today I owe somebody like you (Petit) respect. I owe respect to Mr Zidane because you did win the World Cup.

To his credit, Petit then admonished Diouf’s claim by insisting that Gerrard was an “immense” player, to which the Senegal striker responded:

I repeat. I respect the player, very big player, but the man, I do not respect. And I told him, I let him know that.

Then as you know, there were some ass-kissers, who went to the manager to repeat what I said. That was the real problem. When Gerrard did that, we had an argument, like real men.

That is why he does not like me. He knows I say what I think, that when it is not right, no problem, I am up for it.

He could not, he was afraid of looking into my eyes. He was afraid of talking to me. Let’s not forget when I arrived I did not ask for his shirt. He asked for my Senegal shirt for one of his mates.