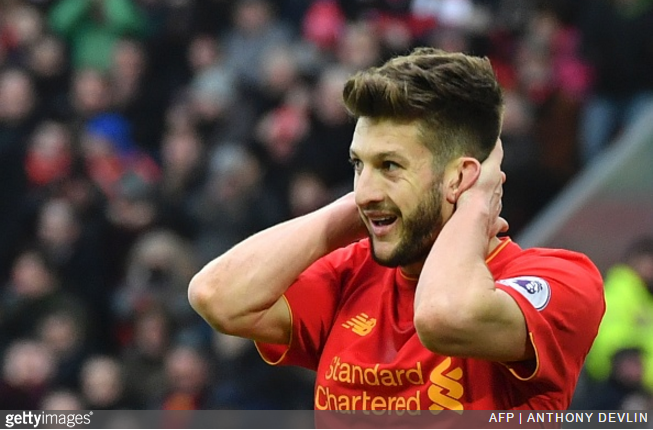 Got a bloody stitch now, haven’t you?

Over the turn of the New Year, Adam Lallana achieved the impressive feat of topping the Premier League stat chart for ‘distance covered during a match’ not once, but twice in the space of just 44 hours.

Indeed, the Liverpool midfielder began by covering 12.88km of ground in the 1-0 win against Man City on New Year’s Eve, only to follow up with 13.22km against Sunderland less than two full days later.

As such, Lallana ended up in first and second place on the ‘distance covered’ list over the course of the New Year fixtures  – i.e, Premier League matches between 31st December and 2nd January.

However, in an interview with the official Liverpool website, the man himself has revealed that he didn’t do it alone.

Indeed, he has the 5,000 calories he guzzled between the end of the City match and the start of the Sunderland game to thank!

As per Lallana’s detailed breakdown, it all began with a plate of pasta forced down in the Etihad dressing room directly after the final whistle, followed by another, bigger plate of pasta and meat when he got home at around 10:30pm.

The following day was another wanton display of mega-nutritional power-snacking:

I think I woke up about 7.45am and had toast in bed. Then I went downstairs and about 10 o’clock, I had some Weetabix with banana.

At midday, my old man was up at my house so he made bacon and egg sandwiches in a bap, so I had two of them.

I got into training at 3pm for recovery and had a yoghurt and a Ryvita-type bread with chicken on and another shake.

We did recovery and then after that, I had pasta, chicken and veg. We travelled to Sunderland, got there about 8.30pm at night and there was a big sandwich station set up for us – so I had two big sandwiches, packed with meat, and a yoghurt.

Then the next day, on the morning of the game, you eat as much as you can.

It’s a good job he’s running 13 kilometres a game, otherwise he’d be the size of a two-bedroom bungalow by now.