While the fact that Philippe Coutinho is poised to join Barcelona very soon is hardly the footballing world’s most labyrinthine secret, the Brazilian forward, for the time being at least, remains an employee of Liverpool Football Club.

That’s why Nike have been more than a little bit sneaky in jumping the gun, by referring to Coutinho as a Barcelona player on the Barca section of their website. 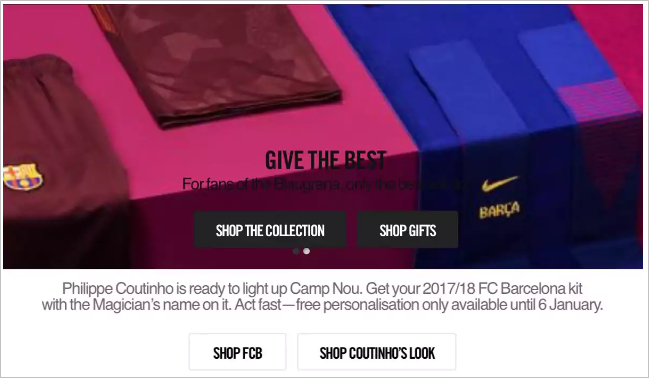 Indeed, the sportswear company, who provide all of the Catalan club’s kit, urged fans to purchase their very own personalised Coutinho shirt:

Philippe Coutinho is ready to light up Camp Nou. Get your 2017/8 FC Barcelona kit with the Magician’s name on it. Act fast – free personalisation only available until January 6.

The promotion, a link to which also appeared on Barca’s club website, was swiftly removed within an hour of going live.

It was also reported that a search for “Coutinho” on Nike’s store would take shoppers directly to the Barca section.

Naughty, naughty. We can’t imagine Liverpool will be overly pleased upon stumbling over this.