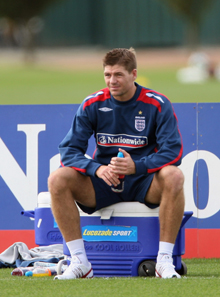 Itâ€™s a club vs. country fight thatâ€™s been simmering all week as England waits to see if Liverpoolâ€™s Stevie G will be ready for our decisive Euro qualifiers.
In the red corner is Rafa Benitez who insists that his club captain needs more time to recover from a fractured toe and is adamant that he shouldnâ€™t be forced to play with a pain killing injection â€“ despite handing him a hypodermic when Gerrard last played for the â€˜Pool against Chelsea.
And, in the red, white and blue corner, is an increasingly desperate Steve McLaren who seems prepared to offer the midfielder a foot transplant as long as he can take England through to the Finals.
Who will be the last man standing?
Weâ€™d be particularly interested to hear the views of any Liverpool fans