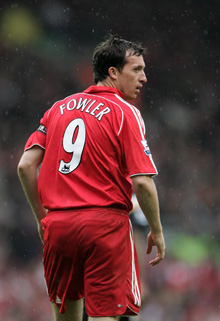 The man revered as â€˜Godâ€™ returns to his spiritual home tonight as Robbie Fowler comes back to Anfield in a Cardiff shirt to play in tonightâ€™s Carling Cup match.
Itâ€™s been nearly fifty years since the two sides met but ex-players have a tendency of scoring against their old clubs and no one will be more pumped up than Fowler to impress in front of the Kop. Click here for some of his finest moments.
Fowler scored twice in the last round against West Brom to make it four in two games in the Carling Cup but the club are struggling in the Championship and fans have been concerned by a lack of pace upfront.
Yet even Rafa Benitez, who brought Fowler back in from the cold for a final swansong on Merseyside, wouldnâ€™t deny him a goal tonight. â€œIt would be nice if he scored â€“ but not until weâ€™ve secured the match,â€ he said.
Thatâ€™s quite a show of sentimentality, especially in the cutthroat world of football. Do all Liverpool fans share the same view and how would they feel if Fowler scored the winner?