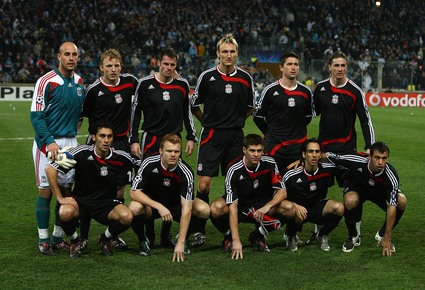 No.1 Playing in black suits Liverpool, it seems. Playing in peach-and-sky blue definitely does not suit Marseille. One look at the respective kits of both teams, even before the match had kicked off, told me that Liverpool would win. That and the fact they have much better players.
No.2 I never thought I’d say it, but here goes: it’s really good to see Harry Kewell back in action.
No.3 Marseille’s Samir Nasri, currently France’s young player of the year, is going to be some player. I think I once bought him in Pro Evo Soccer and he developed into a world-beater; it will be interesting to follow his career in the real world.
Watch highlights of the game, including all four goals (Liverpool’s second goal, scored by the increasingly impressive Fernando Torres, is a joy to watch), after the jumpâ€¦