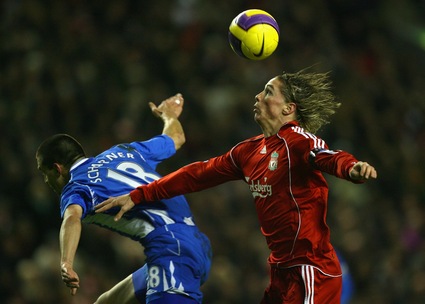 Liverpool are a well-organised, powerful, athletic, talented team â€“ but they don’t half play some dull football. I have no doubt that Rafa Benitez makes sure that his players eat the right shape of pasta, but football is about more than pure science. It’s about genius, it’s about inspiration, it’s about impossible-to-define moments of magic that win you games.
Liverpool don’t have that spark of invention that will transform them into a title-winning team. Man Utd and Arsenal have it; Liverpool and Chelsea lack it.
Cristiano Ronaldo, Ryan Giggs, Carlos Tevez, Wayne Rooney, Cesc Fabregas, Emmanuel Adebayor, Robin van Persieâ€¦ can Liverpool claim to have any creative talents to match that lot? They have the destructive brilliance of Javier Mascherano, the passionate leadership of Stevie G, the stalwart defending of Jamie Carragher, and the unquestionable quality of Fernando Torres (the one ‘Pool player who does belong on the above list). But that’s not enough. That points to a third- or fourth-place finish. Again.

Both Man Yoo and Arsenal would have finished off Wigan at home last night, and comfortably â€“ you can’t challenge for the title by dropping two points at home to a bottom-six club.
It’s not that I’m anti-Liverpool, at all. It’s simply very frustrating when, each season, it seems that they have the tools to get one over on Man Utd and Arsenal, but then flatter to deceive.
Turning to Wigan, this was an excellent point, and proof that new boss Steve Bruce does know what he’s doing. Titus Bramble has been the most notable recipient of a much-needed confidence boost, and perhaps it’s no coincidence that Bruce knows all about what it takes to be a central defender in the top flight. Even the most one-eyed football fan knows that Bramble can be really, really good on his day, but he makes far too many gaffes. If Bramble can eliminate the silly lapses in concentration from his game, he may quickly shed his ‘laughing stock’ label.
Bramble has now scored twice in two games, and his goal last night was a revelation â€“ a wonderful, instinctive finish that any striker would have been proud of. Good on you Titus.
Liverpool 1-1 Wigan: watch the goals
Liverpool Pies