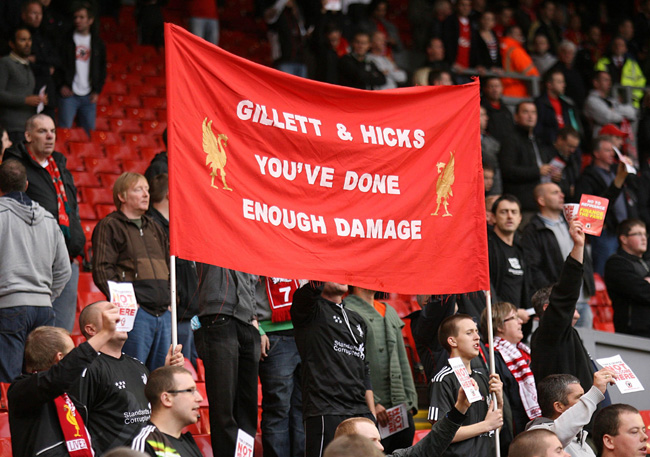 Finally, light is emerging at the end of the tunnel for surprise Premier League strugglers Liverpool. In recent seasons, the club has been embroiled in more boardroom dramas than an episode of Dallas, but now, courtesy of New England Sports Ventures (NESV),  peace may about to be restored to the kingdom of Anfield.

NESV, who own the Boston Red Sox, are reported to have had an offer of around £300 million to buy the club accepted by the Anfield board, although the deal will need to approved by the Premier League, while an ongoing legal dispute between current owners Tom Hicks and George Gillett, and managing director Christian Purslow and commercial director Ian Ayre, also still needs to be resolved. The rather unpopular current US owners believe the bid from NESV seriously undervalues the club, however chairman Martin Broughton is delighted with the deal which will cover the cost of the loans and fees owed to the Royal Bank of Scotland:

“The board decided to accept NESV’s proposal on the basis that is best met the criteria we set out originally for a suitable new owner. NESV’s philosophy is all about winning and they have fully demonstrated that at Red Sox.”

So with Hicks and Gillett about to pack up their wagons and head back west (probably meeting the club’s new owners going in the other direction), the Anfield faithful will surely breathe a sigh of relief.  Although what they’ll make of yet another set of American owners remains to be seen.