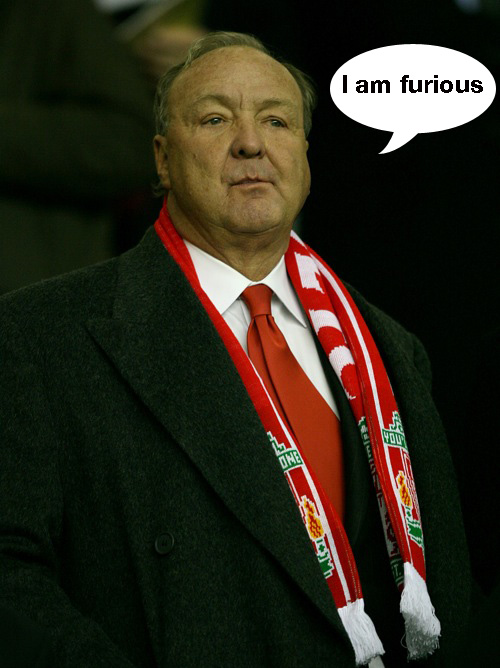 Tom Hicks is furious right now. And you won’t like him when he’s furious.

In an interview with Sky Sports, the Texan buffoon said:

It has hurt my family tremendously. This is a very valuable asset that was swindled away from me in an epic swindle.

Tom Hicks tried to fuck Liverpool FC and gain from it; but although he did a considerable amount of damage to the club, he was the one who ended up bent over the kitchen table, eyes watering. And I’m sure for most LFC fans, that is some sort of happy ending.

However, in true Hicks style, he finished the interview with a veiled threat of more legal action: “This isn’t over.”

Addendum: For all the trouble Hicks and Gillett caused, not only in terms of the debt they accrued but also in damaging the club’s morale and crushing its spirit, the coaching and playing staff must also be partly blamed for Liverpool’s current position. Transfer funds were wasted (“Rafa had the money, he just bought bad players,” said Hicks – a case can be made to back up that assertion), the squad was mismanaged etc. … it’s not ALL on Hicks and Gillett. To claim as much is disingenuous or plain wrong.

Addendum 2: There is no guarantee that John W Henry and co. will make things better. Henry is infinitely more charming than Hicks, but that charm will only see the Red Sox owner through his honeymoon period at Liverpool. The important thing is to bring some stability to the club, not go out and splash cash on comfort signings, as Newcastle United once made the big mistake of doing.