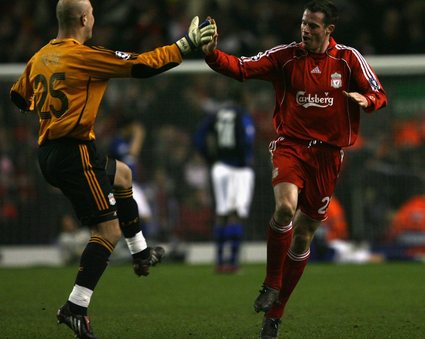 1 Losing to a Championship side is the perfect way to get your team prepared to play one of the best teams in Europe.
2 Although it does help if they play most of the match with 10 men. Marco Materazzi’s first yellow was perhaps a little harsh but having picked it up he cannot complain about his second.
3 The referee hadn’t really intended to send Materazzi off. His body language as it dawned on him that this was Matrix’s second bookable offence was hilarious. “Oops, I already booked you once, didn’t I? I’d better show you the red card then because I don’t want to be the next Graham Poll.”

4 You can always rely on Steven Gerrard to pull all the stops out when you need him to (England duty excluded, of course).
5 Rafa Benitez will be happy that things are still on course in his favourite trophy and he has alleviated the pressure a little with that victory.
6 And his individual interpretation of Sir Alex Ferguson’s touchline watch-tapping drama, in which he demanded more time rather than an immediate final whistle, paid off.
7 According to Clive Tyldesley, the FA Cup defeat to Barnsley “closed another trophy cabinet in Liverpool’s face.” Surely leaving the trophy cabinet – presumably somewhere in the FA’s headquarters in Soho Square – unlocked and open in order to gloat to Liverpool when they are eliminated is asking for someone to steal it.
8 Cristian Chivu cannot defend. He raised his game a little in Materazzi’s absence, but every time I see him play he looks sluggish, out of his depth, and always manages to get himself isolated in positions where players can just run at him.
9 Javier Mascherano is getting back to his 2006 World Cup form. His breaking up of play and his all-round game was very impressive last night.
10 Pepe Reina and Jamie Carragher love nothing better than a celebratory dance.