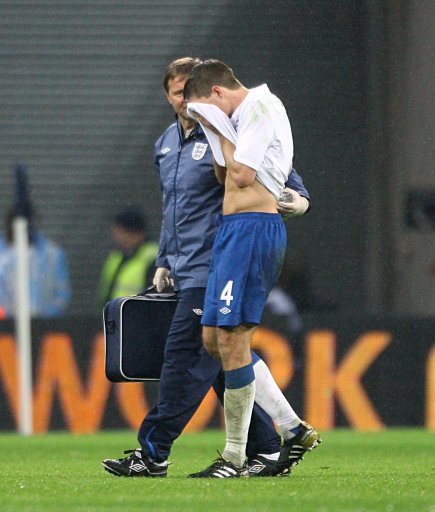 According to this morning’s Sun, Liverpool are to ask the FA to compensate Steven Gerrard‘s £120,000-a-week wages until the midfielder recovers from the torn hamstring he suffered whilst playing for England on Wednesday night.

The club has a prior agreement with the England management that their captain would only play for an hour of the friendly defeat to France, but manager Fabio Capello kept him on the pitch for 85 minutes after losing both Gareth Barry and Rio Ferdinand through injury at half-time.

Capello told reporters after the game that he intends to explain his decision to Liverpool manager Roy Hodgson personally:

“Injuries can happen. We were trying to win the game, he is really important and we had a lot of injuries in midfield. That is why he stayed on the pitch.

“I will speak with [Hodgson]. But to explain what? Afterwards he will be either happy or not happy. I know this because Steven is a really important player.”

Gerrard is now expected to be sidelined for the next month, meaning he will miss a string of potentially crucial Liverpool games, including both their remaining Europa League group ties with Steaua Bucharest and FC Utrecht.

UPDATE: The FA have confirmed that their insurers are to pay compensation to Liverpool for Gerrard’s hamstring injury. Estimates suggest that the club are in line to receive the full £500,000 that they have demanded from the authorities.