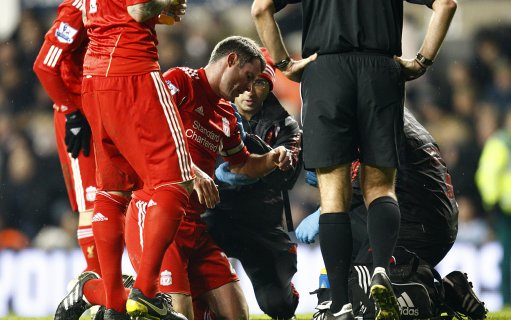 Liverpool’s stand-in captain Jamie Carragher has been ruled out until late February at the earliest, after scans revealed that the dislocated shoulder he sustained against Tottenham on Sunday will require an operation to pin the joint back in place.

“I’ll be having surgery at the end of the week and the average is about 12 weeks [out]. I’d like to come back before that but I’ve got to make sure it’s right. It will probably be late February or early March when I’m looking to come back.

“It’s difficult for me when I’m injured. It hasn’t happened very often, and I’m very lucky with that I suppose, but maybe it’s caught up with me a little bit now.

“I’m sure towards the end of the season when people are maybe feeling a little bit tired I’ll be raring to go.”

Without trying to sound too callous, could a long-term injury to the waning icon that is Jamie Carragher actually turn out to be a blessing in disguise for Liverpool?

For example, I’d put pound-to-a-penny that the as-yet untried Danny Wilson is a smidge quicker off the line than old ‘last-ditch Carra’, or that hirsute Grecian Soto Krygiakos is a damn sight more effective in the air.