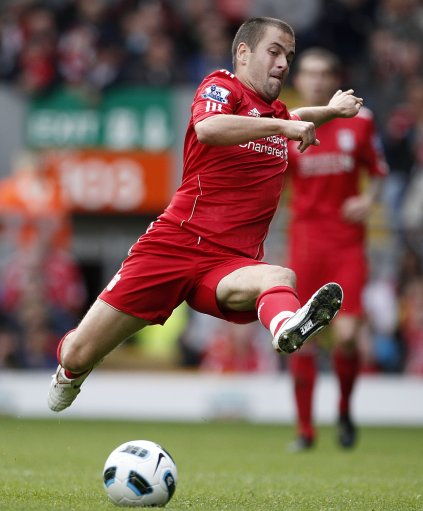 After five weeks on the sidelines, Liverpool are ready to welcome Joe Cole back to the first-string for their Europa League tie with Steaua Bucharest tonight – though, having contributed the sum total of sweet Fanny Adams to the Anfield cause since joining in the summer, it’s fairly hard to imagine that anyone will be overly excited by the winger’s return.

A headline summer move from Chelsea generated some pretty weighty levels of anticipation within Liverpool circles but, since being red-carded for an over-exuberant tackle on his debut, Cole has repeatedly failed to ignite – leaving his free transfer looking like increasingly bad value for money.

However, manager Roy Hodgson is adamant that the ‘insecure’ Cole can finally begin to acclimatise to his new surroundings, once he begins to relax into life at Anfield:

“He isn’t a naturally confident character. He suffers when things are not going his way. Everyone at the club has worked hard to make sure he doesn’t take it too hard and take too much on himself, because he’s quite happy to take responsibility.

“Sometimes those players can take too much on themselves and push themselves even further down. Everyone at the club, but in particular the senior players and his England colleagues here, has done a great job.

“I don’t know how frustrated he has been. But he is a long time with us, a long contract and we know what he’s capable of doing. The sooner he produces it of course the better for me, but there is no pressure on him in that respect.”