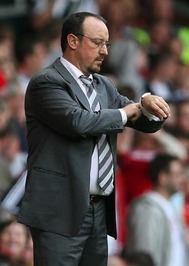 Most football managers are control freaks, of course, but I couldn’t help but smile at a recent quote by Fernando Torres on his obsessive manager:
“Rafa concentrates on the professional side of things. He tries to improve every minor detail and movement you carry out during the course of a game, and he also explains the reasons behind his decisions.
“He’s obsessed that you understand what you are doing and why. He’s not happy that you do things just because he tells you that something has to be done.
“He says, ‘Do it like this. Do you understand why you are being told to do so? No? We’ll go through it again then’.”

Rafa hates it when football games have no pattern, but perhaps he needs to accept that he can’t control every single aspect of his team. I think Torres meant to praise his manager’s forensic attention to detail, but Benitez’s methods comes across instead as rather patronising and joyless.
Still, I can’t argue with the results. Liverpool must be the best-drilled team in the Prem, and all thanks to the goateed Spaniard. But I get the feeling he’d rather coach a bunch of robots than real, flawed humans. Fun guy.
[@ This is Anfield]