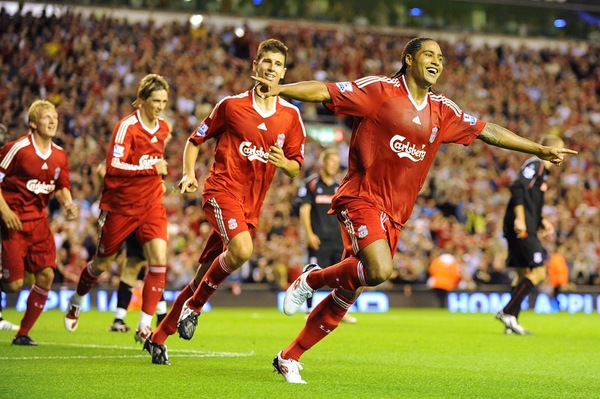 “Weeeeeeeeeee!”
This is where you get to step into Rafa’s shiny slip-ons and pick Liverpool’s best starting line-up for this season. First up though, I’ll reveal my selection (based on the Pool’s squad at time of writing).
I meant to post this before the season started (duh), but horrible server gremlins meant I’ve had to wait until now.
This is the default team I would go with:

My XI (in a 4-2-3-1 formation):
Pepe Reina
Glen Johnson, Martin Skrtel, Jamie Carragher, Emiliano Insua
Javier Mascherano, Steven Gerrard
Dirk Kuyt, Alberto Aquilani, Yossi Benayoun
Fernando Torres
OK, the back five is easy to pick. Pepe is top-class. Glen Johnson looked great going forward against Stoke and is a clear upgrade on the solid-yet-unadventurous Arbeloa. Carragher and Skrtel make a solid pairing, although I think this is possibly Carra’s last season as an automatic choice. At left-back, Insua is lively and gets the nod over the uninspiring (uninspired?) Fabio Aurelio.
In midfield, the Xabi Alonso situation is crucial. As in, there is no Xabi Alonso. Rafa Benitez has decided that Lucas can do a decent impersonation of Xabi, but it’s obvious that the Brazilian has still not figured out how to play in the Premier League – and anyway he’s nowhere near as good a passer as the Spaniard. With that in mind, I’d be tempted to move Steven Gerrard back alongside Mascherano and bring in new boy Alberto Aquilani, who can link up with Torres in the way that Gerrard did so well in 08/09; Aquilani is not a direct replacement for Xabi, but he is talented enough to warrant a place in the team. The workhorse Kuyt and the underused Benayoun would flank Aquilani and offer support to the only top-class striker in Liverpool’s squad: Nando.
You might say I’m removing Gerrard from the role that he played so well last season, but he could only do that because Xabi was there to protect him/play him in. Without Alonso, the structure of Liverpool’s team needs a rethink – a team with both Gerrard and Aquilani is surely better than a team with both Gerrard and Lucas, no?
Anyway, that’s my take. Let’s have your thoughts and starting XIs…
MORE
What is Barcelona’s best starting XI for the 09/10 season?
What is Tottenham’s best starting XI for the 09/10 season?
What is Arsenal’s best starting XI for the 09/10 season?
What is Man Utd’s best starting XI for the 09/10 season?