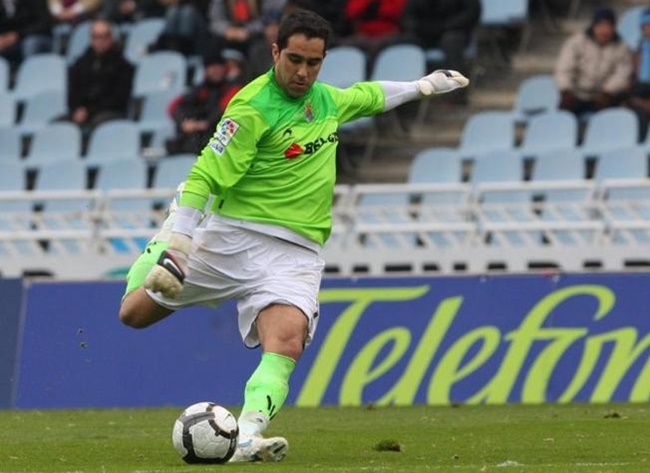 After becoming something of a punchline for his error-strewn handling at Man City last season, Claudio Bravo gave his flagging reputation a much-needed shot in the arm with a heroic display at the end of Chile’s tense knock-out victory over Portugal in the Confederations Cup.

The City ‘keeper swatted away all three of the Portuguese penalties he faced in the shootout, simultaneously sending Chile through to the final and making more saves (3) in 10 minutes than he managed in the six appearances he made in the Premier League in 2017.

And so, with Bravo’s star on the rise once again, we thought we’d skip back to the diminutive keeper’s first and only career goal to date – scored in a Segunda Division match between Real Sociedad and Nastic de Tarragona in February of 2010.

The goal, scored just seconds before half-time, proved to be decisive as Sociedad held on to win 1-0.

The three points garnered also proved incredibly vital as Bravo’s side went on to clinch the second division title by exactly that margin just a couple of months later.

Given the myriad difficulties Bravo has with handling and the ease with which he dispatches freekicks, we can’t help but think a grievous admin error must have been made at some point in his early career.