One of the most disgusting – and upsetting – acts I’ve ever seen on a football pitch in Britain:

Of course, to call this a horror ‘tackle’ is grossly unfair on horror tacklers everywhere. This was a flat-out assault: deliberate, brutal and criminal. The FA suspended Thatcher for eight matches for this incident, with a further 15-match suspended ban for two years. He got away very lightly.

Imagine if such an incident were to happen today. We would all be foaming at the mouth, calling for the aggressor to be banned for life – or longer. As I remember it, although people were sickened by Thatcher’s assault on poor Pedro, and some people did indeed want him banned for life, it wasn’t to the extent where the entire media was screaming for his head on a stick; I even remember some people defending him with the classic line “he’s not that sort of player”, which in Thatcher’s case plainly wasn’t true (and also smacked of “foreign players don’t like it up ’em” xenophobia) – he was very much that sort of player. 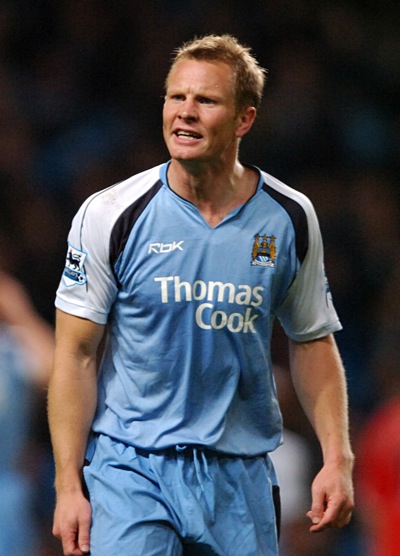 Angry young man: Thatcher in action for Man City in 2006

As for Thatcher, he’s currently a free agent after his contract with Ipswich Town was terminated in February 2010. At 35, and with dodgy knees, his pro career is almost certainly over – he won’t be missed at all and I couldn’t care less that he curbed his temper as he got older.

Mendes, who is only 31 (I thought he was a couple of years older, to be honest), currently plays for Sporting Club in his native Portugal.