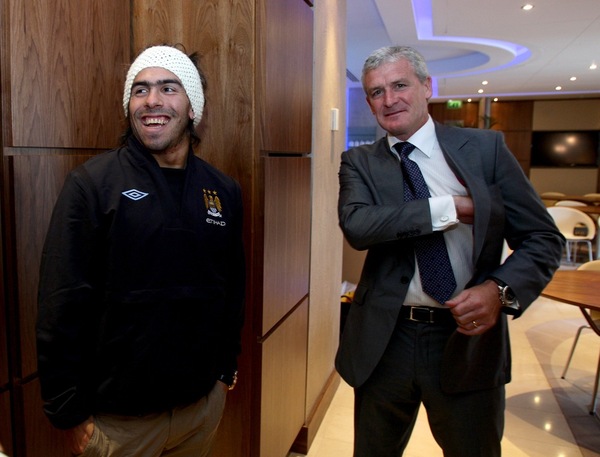 “And this is where I keep my gold-plated pen, for signing new players. It doesn’t write in ink, it uses oil.”
Mark Hughes has asked Diego Maradona to omit Carlos Tevez from Argentina’s squad to play Russia in next Wednesday’s international friendly.
“We don’t think Carlos should play for his international team and we’d prefer him to stay back next week.” Sparky said.
“The Argentine doctor came over and he’ll be speaking to Maradona today. He’ll probably want to check and see how Carlos is now. Ideally, I’d prefer that he wasn’t selected. He’s not trained all pre-season.”

Aw, Man City’s boss is beginning to sound like Sir Alex Ferguson. Sweet. Except Fergie wouldn’t ask politely, he’d just keep Tevez locked in his bathroom and tell Maradona to swivel. But good effort, Sparky. You’ll get the hang of this “big club” lark soon enough.
Talking of bathrooms, that’s how Tevez crocked himself. Sparky explains:
“He [Tevez] had an injury from his last international, then banged the same area when he slipped in the shower in South Africa. He’ll be fine for the start of the season, but he’s still not able to put his full weight on it.”
He slipped in the shower!? I thought this guy had superb balance? Looks like Fergie was right to ditch him.