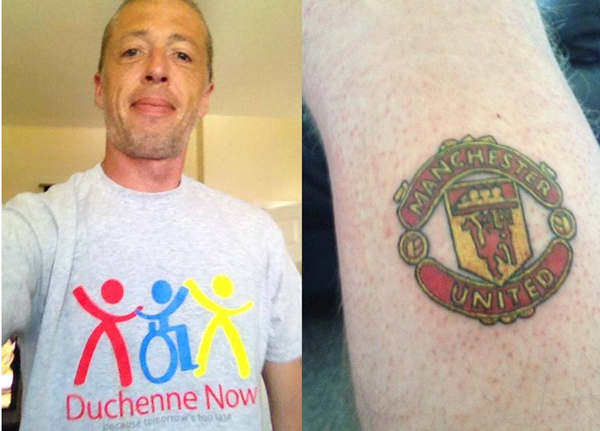 A devout lifelong Manchester City fan has done the unthinkable and had Manchester United’s badge tattooed about his person.

Given the gravity of his actions it stands to reason that the cause had to be a good one and, to be fair, causes don’t come much gooder.

Mark Pinder, the chap in that thar photo, has had the house insignia of his sworn enemies inked on his leg in the name of charity – specifically to help raise money for his son Kirk, who suffers with Duchenne Muscular Dystrophy.

The incurable degenerative condition has caused 12-year-old Kirk’s muscles to deteriorate, leaving him confined to a wheelchair and unable to lift his arms.

“All you can do is watch your child deteriorate in front of you,” Mark, 38, told the Manchester Evening News.

“When he was diagnosed I buried my head in the sand for a couple of years, but I thought it was about time I did something.”

And do something he most decidedly did.

In fact, he took the plunge and, with the support of the entire Manchester footballing community, proceeded to raise around £10,000 for the small price of having United’s crest needled onto his leg to match the City badge he already had on his arm.

Now, Mark is planning to donate all the money to the Duchenne Now charity, who help provide support for people living with Kirk’s condition.

“I’m quite happy with the tattoo now because it’s a good memory to remind me of all the money I raised.

Although I thought it would be a big thing before I’m not bothered about it now.

“I’m so proud to have made £10,000 and I’ve loved the whole fundraising experience. It’s been crazy to see how the community rallied together and it was humbling for people who don’t know me to take an interest and donate to the cause.

“It’s been fantastic and the support I have had off people has been brilliant. The whole process has also helped raise awareness and inform people about the condition which is what I set out to do.”

Wonderful news and life-affirming proof that even the bitterest of football rivalries only run so deep.