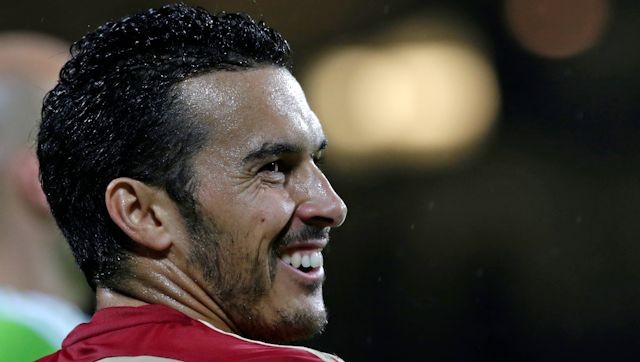 It’s official. Chelsea have signed Pedro from Barcelona on a four-year deal.

Indeed, Pedro has already come through his first training session at Cobham…

.@_Pedro17_ has joined the #CFC squad at Cobham for his first training session this afternoon http://t.co/kj1qyVnXlc https://t.co/r7ctaDwTaW

The Spaniard never did join Manchester United, preferring life in London to playing under Van Gaal at Old Trafford. On the official Chelsea website, the club hails their new recruit and can’t resist having a dig at United while they’re at it:

The Spaniard arrives as a highly coveted winger who can also play as a central striker. He is proven at the very highest level and already possesses an impressive medal haul.

The 28-year-old has accumulated three Champions Leagues and five La Liga titles, as well as being a world and European champion on the international stage.

He said: ‘I am very happy to be here. I am very excited to start my adventure at Chelsea and I am here to keep winning titles. Thanks to the club and the supporters for giving me the opportunity to put the blue shirt on.’

Chelsea then review the player’s career. This biography contains this line:

His brilliant performances at club level saw him secure a place in the Spain squad for the 2010 World Cup in South Africa. Pedro started both the semi-final and final, and was a key figure in their victory over the Netherlands.

A year later he scored the opening goal in the Champions League final at Wembley as Barςa beat Manchester United 3-1.

Cor blimey, talk about laying it on thick! Is Mourinho writing the Chelsea website news as well as the match reports now?