Manchester United will soon be turning out in a lively shade of pink in order to pay homage to one of city’s most iconic, and sadly now defunct newspapers.

While no date has been set in stone quite yet, United and Adidas have apparently put their heads together and designed a special one-off pink shirt that they will wear at Old Trafford at some point this season.

The newspaper in question is ‘The Football Pink’ – the Sunday edition of the Manchester Evening News and a former staple of the post-match scene (though similar variations were available all over the country) which allowed fans to read football results in the pub after filing out of the stadium. 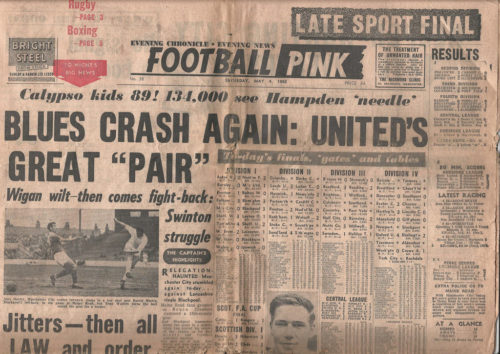 Alas, with sales declining, costs rising and the internet making access to results and news almost instantaneous, The Pink stopped publication in 2000.

Now, some 18 years later, United are doffing their proverbial cap by turning out in their first ever pink strip.

According to The Times, the club are yet to announce when the strip will go on sale, but it is understood that an launch event is being planned to launch it for next Tuesday at one of the Adidas stores in Manchester city centre.