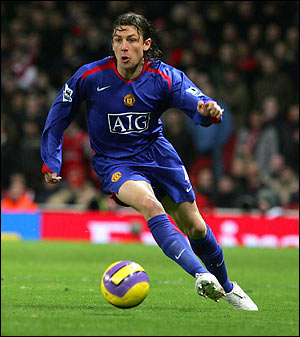 Gabriel Heinze is a troubled man. Apart from being the footballer that no commentator can agree on in terms of pronouncing his surname, he’s also trapped in a loveless relationship. By that I mean his stay at Old Trafford. Heinze will take his dispute with Manchester United to a Premier League arbitration panel next week regarding his wish to leave the club.
The Argentine wants to join Liverpool and claims he has a letter from United which would allow him to leave if a club offered Â£6.8m. However, United insist they made it clear Heinze would not be permitted to join one of their title rivals and still has two years left on his contract.
Is this fair? In any other job, Heinze would be allowed to hand his notice in and, in a tricky scenario, would be given ‘gardening leave’ before being allowed to join a rival company. However, we all know that football is a very different place to the rest of the world… but isn’t that how the Bosman ruling came about?

As this row brews, Heinze has vowed to “carry on like a professional” and is continuing pre-season training with ManYoo. Apparently he met up with Alex Ferguson at United’s Carrington training ground yesterday to discuss his future, having confirmed he has brought in lawyers to try to force through a move to Anfield.
Previously United chief executive David Gill said he was happy the club was in the right. “He is a contracted player for two years and unless we receive an offer which is acceptable to us as a club, he will remain with us,” he said. Gill says that before Liverpool revealed their interest, he verbally informed Heinze’s agent that United would not be prepared to sell him to any of their three major domestic rivals. That conversation is thought to have been recorded, and if so, could feasibly be used as evidence if the matter ended up in court.
Is this another case of an agent unsettling a player? Ferguson believes so saying “I think that if we could take away the agent’s role in this I don’t think an awful lot is wrong with Gabi’s position at the club,” said Ferguson. “We’ve looked after Gabi very well. He had his cruciate knee operation and we looked after him. We let him do his rehabilitation in Spain, which he wanted and I think he’s delighted at how we’ve treated him. We’ve conducted ourselves in a way that suited Gabi perfectly.”
In yet another murky transfer saga (although not half as messy as the Tevez affair), Heinze highlights the problems in football. It would seem that football isn’t a free market and the Bosman ruling was only the start of opening up the market for players to work in. Do you think that it’s unfair that Heinze’s move to Anfield is facing such opposition or is it fair enough that ManYoo don’t want to lose a talented player to a rival?