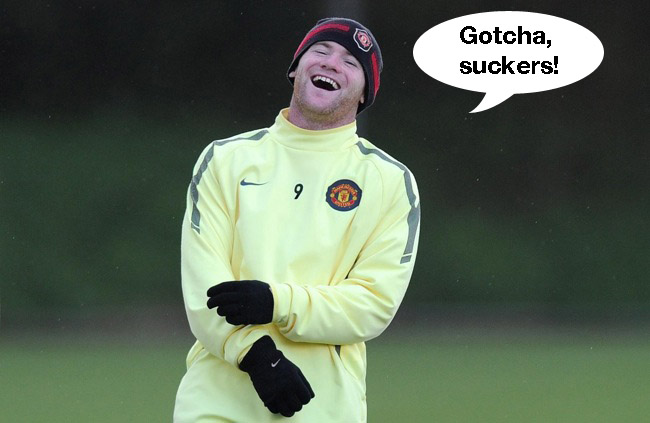 A pair of statements released on the Manchester United site just minutes ago serve to confirm that Wayne Rooney has signed a huge new five-year contract at the club.

The first statement is from manager Sir Alex Ferguson:

“It’s been a difficult week, but the intensity of the coverage is what we expect at Manchester United.  I said to the boy that the door is always open and I’m delighted Wayne has agreed to stay.

Sometimes, when you’re in a club, it can be hard to realise just how big it is and it takes something like the events of the last few days to make you understand.  I think Wayne now understands what a great club Manchester United is.

I’m pleased he has accepted the challenge to guide the younger players and establish himself as one of United’s great players.
It shows character and belief in what we stand for.

I’m sure everyone involved with the Club will now get behind Wayne and show him the support he needs to produce the performances we know he is capable of.”

And the second batch of quotes are from Rooney himself:

“I’m delighted to sign another deal at United.  In the last couple of days, I’ve talked to the Manager and the owners and they’ve convinced me this is where I belong.  I said on Wednesday the Manager’s a genius and it’s his belief and support that have convinced me to stay.

I’m signing a new deal in the absolute belief that the management, coaching staff, board and owners are totally committed to making sure United maintains its proud winning history – which is the reason I joined the Club in the first place.

I’m sure the fans over the last week have felt let down by what they’ve read and seen.  But my position was from concern over the future.  The fans have been brilliant with me since I arrived and it’s up to me through my performances to win them over again.”

Initial thought: If the hubbub was all about United’s ambition and not about the money after all, can we assume that Rooney’s new deal is on exactly the same terms as his previous contract?