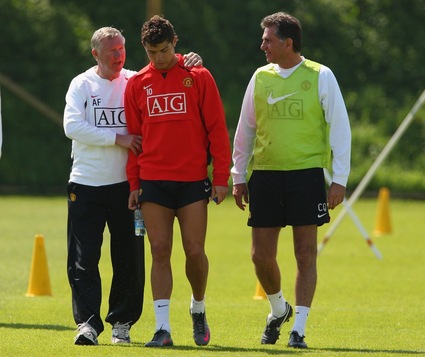 Cristiano Ronaldo says he may consider his future at the club after next week’s Champions League final – great timing C-Ron, I bet Fergie will be chuffed to hear that.
“I’m happy here, but let’s see what happens after the Champions League final,” Ronaldo told Antena 3, a Spanish TV station, at United’s Carrington training ground. Ooh, the little tease.

“I know Real Madrid like how I play and other teams in Spain do as well,” Ronny continued.
“I have said millions of times that I would love to play in Spain,” Ronaldo is widely reported to have told Antena 3. “But it’s one thing to dream and another thing for it to be a reality… I am feeling calm here. I’m happy here but in the future I don’t know.”
Could he not have waited until after next Wednesday’s final to say this stuff? It’s not exactly a come-and-get-me plea, but it is the sort of pillow talk that will get Real Madrid very aroused in the trouser area.
If I was Fergie, I’d hit the roof over the timing of these remarks, which now threaten to overshadow United’s build-up for the CL final. We all know that Man Utd’s boss doesn’t think twice when getting rid of players who displease him – no matter how big a name they are – but could he replace a unique player like Ronaldo? Almost certainly not. Imagine how much less threatening United’s team sheet looks without him, and you realise that Ronaldo holds most of the cards in this negotiation.