As of next season, Burnley fans will be able to sup a foamy pre-match ale in a pub bearing their erstwhile manager’s name.

Last November, The Royal Princess, situated just around the corner from Turf Moor, vowed to change their establishment’s name to ‘The Royal Dyche’ should the Clarets qualify for the Europa League this season.

Lo and behold, a goalless draw against Brighton last weekend all but sealed Burnley’s place inside the top seven, leaving Royal Princess landlady Justine Lorriman to start hatching plans for a rebrand.

I don’t know if I am more excited about getting into Europe or renaming the pub.

I am going to the player awards next week and hoping to catch him (Dyche), just to make sure we can get his blessing.

Dyche has previously joked that he expects the pub to be renamed ‘The Handsome Ginger Fella’ in his honour, though it would appear that ‘The Royal Dyche’ is the preferred moniker of choice. 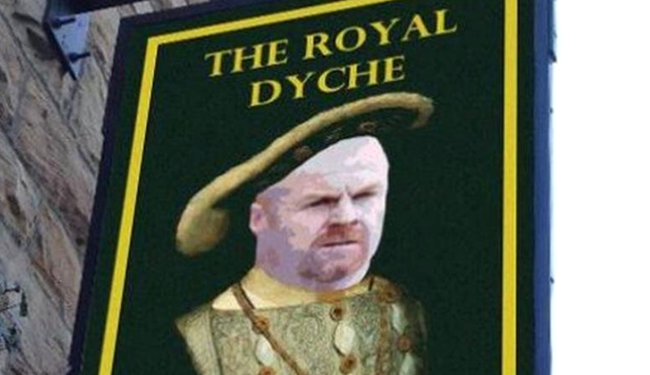 The sign needs a bit of work – a scowling Sean Dyche in Henry VIII drag isn’t going to lure many punters in – but the gesture itself is really rather nice.

Nice to see a long-serving manager getting the appreciation he deserves.