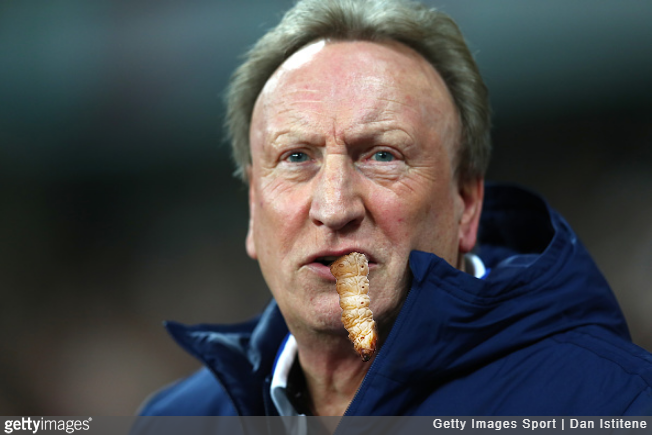 Cardiff City manager Neil Warnock has announced that he could be tempted to follow Harry Redknapp and take part in a future series of ‘I’m a Celebrity…Get Me Out of Here!’

Redknapp is odds-on favourite to win the current series of the ITV game show, in which a group of loosely-defined celebrities complete various repulsive and nauseating tasks to win food rations and other such luxuries.

So far, the former West Ham, Portsmouth and Tottenham boss has eaten myriad insects, live grubs and larvae as well as seeing off a “knobbly” pink smoothie made using the blended penis of a pig. Standard stuff.

Despite all that, Warnock has joked that he could follow Redknapp into the jungle, though he’d have to be paid more to offset the fact that he is almost universally loathed by football fans the length and breadth of the land and would therefore get voted to perform most, if not all of the Bushtucker trials.

I would imagine I’ll be in there next year. The lads (Cardiff players) have put my face on Harry’s body on the dressing room window!

I don’t think I’d be scared. But the problem is I’d be doing every horrible thing there could be because I’d get the votes.

It would be payback time. So they’d have to pay me 10 times more than they paid everybody else.

Redknapp is favourite to be crowned ‘King of the Jungle’ come the final show on Sunday night, with the 72-year-old’s chirpy demeanour and gentlemanly etiquette winning droves of sceptical football fans over.

This came as no surprise to Warnock, who knows Redknapp well thanks to an entire working life spent together in football.

That’s Harry – that’s how we are. Football humour in the jungle is a blessing – it’s something that lifts everybody.

We’ve all got stories, haven’t we? I rabble on here every week at a press conference.

They’ve got a good group and I’ll watch it a bit more now. The ones I didn’t like, the ones which I could scream at, have gone now.

While there is a sliver of Pies’ psyche that would like nothing more than to watch Warnock choking down a plate of writhing cockroaches, there’s also a part that steadfastly refuses to have anything to do with that kind of reality game show trash.

Unfortunately, one comfortably outweighs the other.