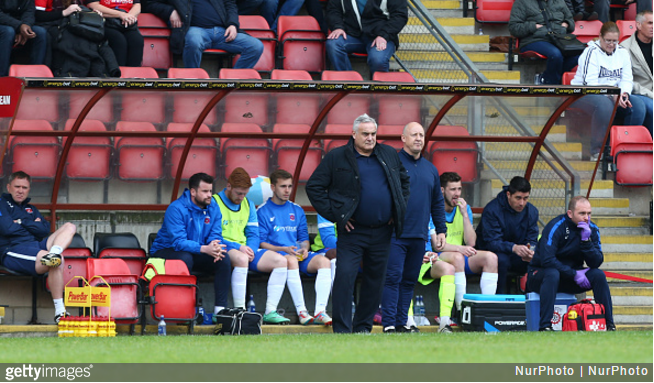 Two days after Jeff Stelling embarked upon a fevered plea for Hartlepool manager Dave Jones to hand in his gun and badge, the League Two side have announced that Jones has been fired from his post.

Watching on in horror as ‘Pool slid into the relegation zone on Saturday afternoon, Stelling – the club’s honorary life president – stared down the Sky Sports camera and barked at Jones to “walk now” after reaping just 13 points from the 51 available since his appointment in January.

Jones also had a wee bite back at Stelling after the home defeat against Barnet, accusing the Sky anchor of “talking rubbish” from his “comfy chair”, also using the phrase “lack of respect” on no less than four occasions.

Indeed, responding to the spat in public hardly did Jones any favours, as Hartlepool issued the following statement on their official site first thing on Monday morning:

[We] can confirm that Dave Jones has left his position as First Team Manager by mutual consent.

Despite it looking like Stelling has excised some considerable sway here, we sincerely doubt that Hartlepool have simply bowed to the whims of the bloke who reads the videprinter out on Soccer Saturday.

Currently being second-bottom of the entire Football League, two points from safety and with just two matches left to play probably figured a little higher in their decision making process.