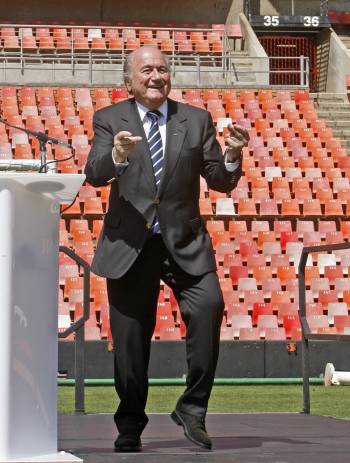 Sepp Blatter is an idiot, but that’s not news – you all knew that anyway.

What is news is the fact that the FIFA president may be planning to scrap the offside rule altogether after seeking the advice of his counterpart in the National Hockey League, Leandro Negre, who scrapped the rule in 1998.

“[Blatter] asked me a lot of questions about it and how successful it was, although he never offered an opinion, so it was difficult to judge what football might do, but he did seem very interested in how we had implemented it.”

It is widely accepted that after getting rid of the rule a decade or so ago, ice hockey has become an increasingly entertaining sport for the spectators but you’ve got to ask: How could it possibly work within the context of a football match?

Now, I must admit that I’ve never seen an ice hockey game so I’ve got no idea how it has affected their matches, but that is immaterial really. I’ve played in enough playgrounds over the years to know that, without the offside rule, football goes to pot.

Being on/offside is a key factor in the dynamic of a game of football. There would be no skill (or need) left in timing or bending a run, and the ability of a player to pick a perfectly placed throughball or a defensive unit to execute a well-drilled offside trap would be moot.

The more you think about the consequences, the more you realise that it can’t, and most probably won’t, happen but I imagine Pippo Inzaghi (he was, after all, born offside) is sitting at home with all his fingers and toes crossed that Blatter gets his way.

Anyway – rant over, what do the football (and/or hockey) fans out there reckon? Would abandoning the offside rule really make the game more exciting? Or is Sepp just up to his old buffoonery again?