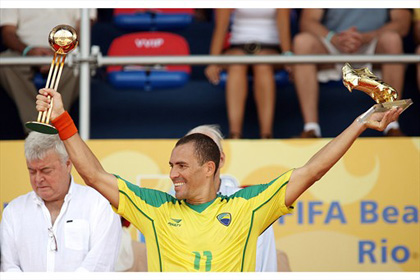 While weâ€™ve been moaning the return of the cold weather, a World Cup has been played in the sunshine on the other side of the world. The Beach Football World Cup came to a conclusion in Rio de Janeiro at the weekend.
It may not be football as we know it but the final result isn’t too different with Brazil taking the title by beating New Mexico 8-2 in the final. Star player Buru received the adidas Golden Shoe and Golden Ball for being the tournamentâ€™s best player â€“ scoring ten goals and creating three assists.
England didnâ€™t even make the Finals â€“ something to do with our pebbled beaches or shall we blame Arsene Wenger for this one too?