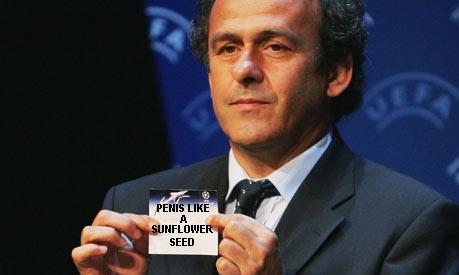 This will never, ever get old

UEFA President Michel Platini, who was present at the Old Firm derby yesterday, has once again outlined his ridiculously atavistic aversion to implementing goal-line technology – insisting that such aid will bring about ‘PlayStation football’, and backed his organisation’s plans to station two ‘additional referees’ behind the goal-lines.

When asked about whether or not he thought that a ‘Hawk Eye’ style system would benefit the game, Platini told the Scottish FA’s website:

Then we will have PlayStation football. One referee is not enough, not in the modern era where you have 20 cameras. It is unfair: the cameras can see everything but the referee only has one pair of eyes. Every time he makes a mistake, those cameras are there to focus on it.

It is why, for the past 10 years, I have asked to change the job of the referee, to help improve the situation and to give the referees better support. These people are going to make mistakes and to be a referee I think you have to be a masochist. The system is bad and I have known this for 40 years.

The referee has to be helped by the clubs, the fans, by players, by the media and also by the authorities – everyone has a responsibility. It is why we have added two assistants for Champions League games this season.

It is a logical step with so many cameras that can pick up incidents: the more eyes there to assist the referee, the better the chance of spotting those incidents.

I’m fully willing to stick my neck on the line and say that the additional referee system should be consigned to the ‘cheap option that died under the microscope’ bin before it even begins to be considered for application across the footballing board – chiefly due to the fact that the two extra assistants appear to be ‘silent partners’ and nothing more.

The superfluous, plaggy baton-twirling AR’s seem completely reluctant to get involved in making decisions and are both completely dominated by the referee, despite being fully qualified match officials and having the better view of penalty box incidents on the majority of occasions, but hey ho – I guess you get what you pay for Michel.