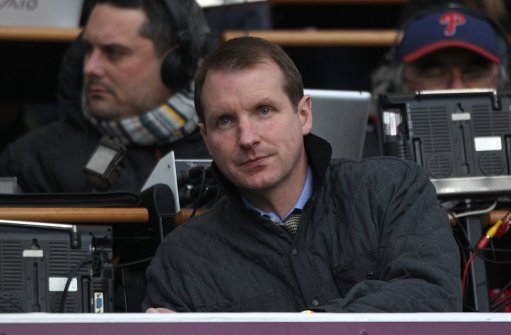 Henry Winter is many things; chief football writer over at the Daily Telegraph, regular presence on the Sunday Supplement, Britain’s preeminent pseud purveyor of the tortured introduction – and you now add ‘straight-up man of his word’ to that list.

Winter went on record that Newcastle and Mike Ashley would never make a long-term commitment to Alan Pardew when he was first appointed at St James’ Park. and that he would risk freezing his knackers off and swim across the Tyne if such a thing should ever come to pass.

Skip forward a year or two and BAM! Toon go and throw an eight-year deal at Pards. Sadly for Winter, commitment don’t come much more ‘long-term’ than that, with the man himself tweeting: “I honour my bets. I promised to swim the Tyne if Ashley showed long-term loyalty to Pardew. He has, fair play, so time for dip in Tyne…”

“Tony Greener, an experienced swimmer and organiser of the annual Tyne 10 Mile River Swim, accompanied him.

“The pair, wearing wet suits, set off from a pontoon at the base of the Tyne Bridge. It took them about five minutes to reach to HMS Calliope on the Gateshead bank.”

Winter also used the swim as a chance to raise a bit of money for the Sir Bobby Robson Foundation. Good lad.

Apparently, Newcastle then dipped into their extensive (-ly naff) club merchandise range and sent Winter an official NUFC towel to dry himself off with as a goodwill gesture.

Well played all round!