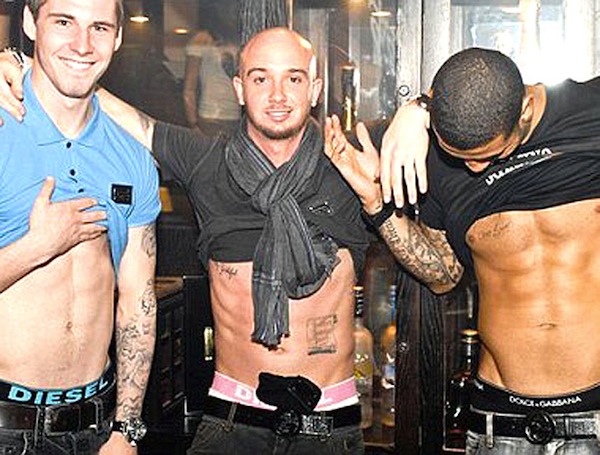 This is how real men pose

Newcastle pair Stephen Ireland and Leon Best (along with reserve-teamer Stephen Folan, seen here on the left) have apologised after photos of them baring their midriffs in the Tup Tup Palace nightclub the night before Toon’s 4-0 defeat to Stoke surfaced on the internet a couple of days ago.

Ireland and Best put out a joint apology via the club’s official website yesterday:

“Although we had both been ruled out of the game at Stoke, and didn’t travel with the team, we realise that going out to a bar was inappropriate ahead of Saturday’s game and we fully regret doing so.

“We were asked to have our photograph taken and we removed our shirts as a tongue-in-cheek joke between friends, but of course the resulting coverage in the press suggests a far different night out.

“Whilst our actions were wrong, neither of us had consumed alcohol and we were out for only a very short period of time.

“However, with the team having an important game at Stoke the following day, we accept that we should never have put ourselves or the club in that position.”

An anonymous staff member at the Tup Tup Palace also phoned the Daily Mirror to back up the Newcastle pair’s story:

“They pulled their tops up as we have boys here who walk around with theirs off – they were just taking the mick. The players were only there for an hour and drank water and Red Bulls.”

So they weren’t drinking, didn’t stay long and knew prior that they wouldn’t be involved for the Stoke game – what exactly are they apologising for then?

Y’know, other than the pink boxer shorts.