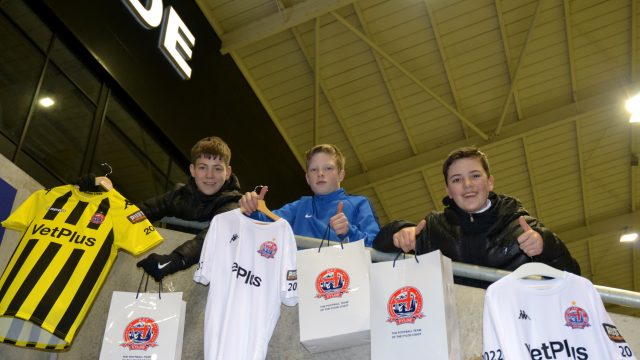 AFC Fylde have plied three young fans with free stuff after the “cunning” trio pulled a prank on the club’s stadium announcer that ended up going viral earlier in the week.

During their 4-1 win over Ramsbottom United in the FA Trophy, Fylde were asked to put out an emergency message over the PA system to report a blocked car in the car-park outside.

“My dad’s blocked in and it’s an emergency – could you read this out?”

Aye, an emergency is it lads? 🤨 pic.twitter.com/vJR0m8OgzH

It wasn’t long before the youngsters –  came forward, most probably still giggling and enormously proud of their handiwork.

However, instead of reading them the riot act, Fylde accepted that they’d been “well and truly had” by Jak, Tom and Timo, and decided to treat the three lads to a mountain of free goodies, including replica shirts and other various goodies from the club shop.

I guess the moral of the story is to follow your dreams, I think?

According to the Fylde website, the lads were invited into their Mill Farm ground on Wednesday night, where they were presented with their spoils.

“The least we could do was return the favour and kit them out with our home strip and a goodie bag,” said club chairman David Haythornthwaite.

All’s well that ends well, even if it did entail falling hook, line and sinker for one of the oldest jokes in the book!