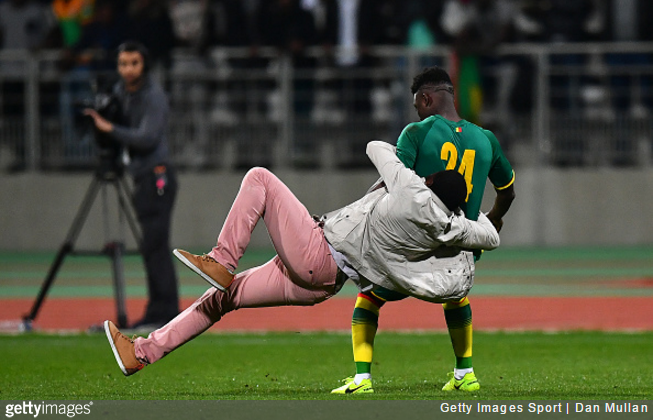 Monday night’s friendly between Senegal and the Ivory Coast had to be scuttled before full-time when a group of lairy fans invaded the pitch.

The match, being played at the Charlety Stadium in Paris, was abandoned in the 88th minute when several pockets of crowd trouble began to develop in the terraces.

Several fans then vaulted over the advertising hoardings and ran onto the pitch, with one yobbo aiming a rugby tackle at Senegal’s Lamine Gassama.

The players were then ushered down the tunnel as referee Tony Chapron brought a premature end to the evening’s entertainment with the scores level at 1-1.

Over in Barnet – yes, Barnet – the similarly transplanted all-African tie between Nigeria and Burkina Faso also had to be called off after seven members of the Burkina squad failed to acquire UK Visas for the match – a sequence of events the Nigerian FA subsequently branded “extremely disappointing”.

The yarn goes that Burkina Faso played Morocco in Marrakesh on Friday and visited the British Embassy in the city afterwards in an attempt to rush through their Visa applications, but to no avail.

All in all, not a fantastic night for African football.