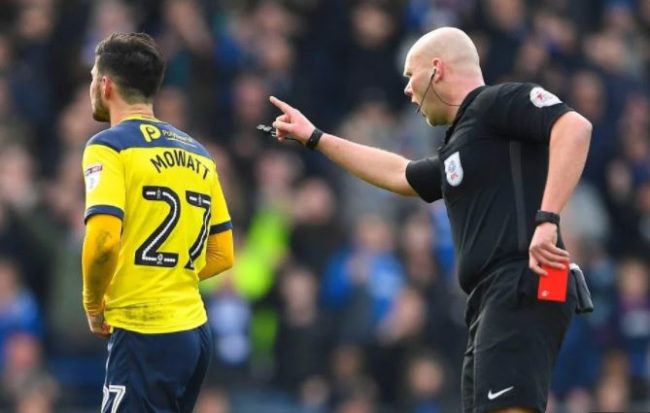 Portsmouth moved to within two points of a play-off place on Sunday, courtesy of a 3-0 win at home to Oxford United.

A major turning point came just after the hour-mark, with the hosts already a goal up.

After  Matthew Clarke had fouled Robert Dickie in the Pompey box, ref Charles Breakspear pointed to the spot.

However, Alex Mowatt’s resulting penalty came back off the post, with Pompey’s Nathan Thompson (stupidly) goading the midfielder. Mowatt responded immediately, slapping Thompson in the face before getting involved in a spat with Matt Clarke.

After calming things down and deliberating with his fellow officials, Breakspear booked Luke McGee for his part in the fracas  before sending off Mowatt…

Quite a horrific minute for the unfortunate Mowatt. Although surely Thompson deserved a card too, with the player already booked in the first-half.

Portsmouth would go on to win the game 3-0, a result which keeps them in the hunt for a play-off place.

As for Oxford, it was quite a first game for new manager Karl Robinson, with his side now 16th, five points above the drop-zone.

Not surprisingly, Robinson was less than impressed by the decision not to give Thompson his marching orders, claiming that Breakspear had made a right mess of the situation. He said:

I’m angry that the referee has cost us the game.

He (Nathan Thompson) has ran 20 yards and goaded him which is a booking in itself and he was booked in the first half.

The referee then told my players that he had booked Thompson after he had already been booked before.