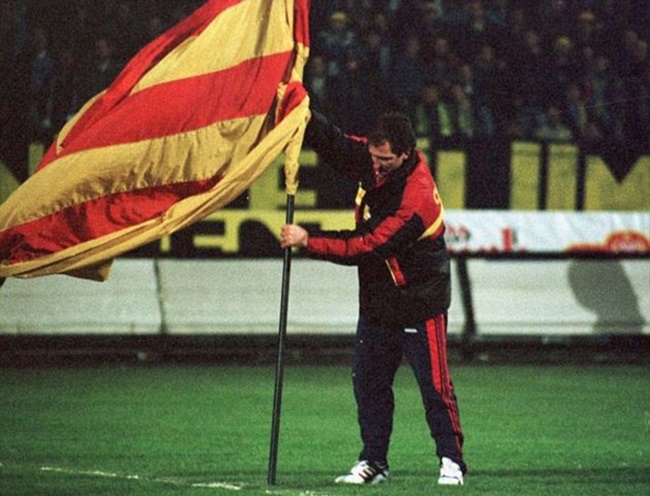 We can scarcely believe it, but it’s now 21 years to the very day that Graeme Souness became an eternal Galatasaray folk hero by driving their club colours into the centre circle at Fenerbahce’s stadium.

Having been out of work for over a year, Souness took charge at Gala for the 1995/96 season and promptly guided the side to a fairly disappointing fourth-place finish in the Super Lig, or 1. Lig as it was then known.

However, Gala did manage to win the Turkish Cup thanks to a two-legged win over despised Istanbul rivals Fenerbahce.

Having won the first leg 1-0 at home, Souness’s team took 120 minutes to scrap out a 1-1 draw at the Sukru Saracoglu Stadium and thus take the silverware on aggregate – Dean Saunders scoring the decisive goal in the 116th minute.

Of course, the atmosphere was already hostile by that point, but it reached a nigh-on infernal pitch when Souness went hurtling into the middle of the pitch and speared an enormous Gala flag directly into the centre spot…

A quick and easy way to drive an entire stadium full of people to the brink of frothing riot.

Souness later claimed that he was motivated to plant the flag after reading that one of Fener’s executives had called him a “cripple” in reference to the open heart surgery he underwent 18 months before taking the Gala job.

When I went there one of their vice-presidents had asked in the papers “what are Galatasaray doing by signing a cripple?”

I saw this guy’s face (in the stadium) and I thought “I’ll show you who’s a cripple” and it wasn’t the smartest thing I’ve ever done.

When I planted it and turned around, I quickly realised there were a number of supporters trying to get on to the pitch.

I managed to get out of there relatively scot-free. Relatively.

Sadly, all bombast aside, the cup win was not deemed to be sufficiently substantial to earn Souness a contract extension, with a hefty 5-3 home defeat against Kocaelispor in their next game all but signalling the end of his brief tenure.