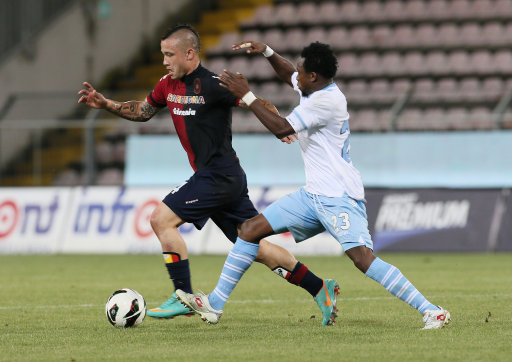 Lazio midfielder Ogenyi Onazi has a bit of a burgeoning reputation for covering an awful lot of ground over the course of 90 minutes, but it was while dining with his brother in the Italian capital on Tuesday night when his turn of pace came in particularly handy.

For you see, while enjoying a meal with his sibling, Onazi noticed a suspicious young ne’er-do-well loitering around a table of tourists.

The 20-year-old Nigerian international’s suspicions were immediately confirmed when the scoundrel plucked a lady’s purse from her pocket and shot off into the evening – but he soon got his comeuppance, around 300 metres or so down the road.

We’ll let Onazi himself take up the yarn from here:

“I was having dinner with my brother near to the Termini Station and there were some tourists sitting next to us.

“I saw a boy and immediately felt due to his suspicious behaviour that he wanted to steal something. I didn’t even have time to tell my brother that he had already snatched the tourist’s wallet and run off.

“I noticed it, so I ran after him, but stayed on the other side of the street. I ran for 300 metres, the thief left the wallet under a car, but I saw him.

“I chased him down and brought him back to the restaurant, avoiding the anger of the people around there.

“I told the restaurant owner to call the police and we brought the wallet back to the lady. She was in tears and thanked me, as the wallet was full of money.

“At that point, seeing as the situation had been resolved, my brother and I left.”

Justice, thy have a name and thy name is Ogenyi Onazi! Brings to mind the time some chump had the temerity to rob Juventus centre-back Leonardo Bonucci at gunpoint a year or so ago.

Put it this way: it didn’t end well for him.

(Many thanks to @Oliver_is_Boss over on Twitter for the tip-off!)