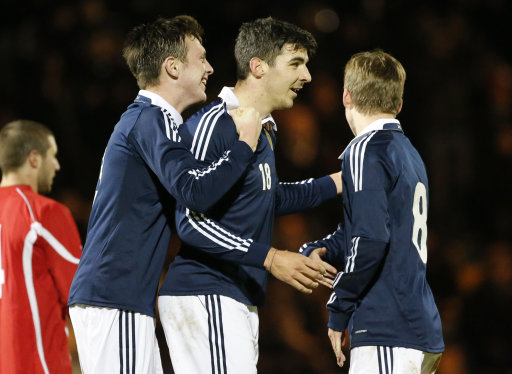 Hands up, we neglected our duties and failed to watch Scotland U21’s game against Georgia U21 last night – though the fool was well and truly on us for doing so, as it meant we also missed Hearts forward Callum Paterson’s wonderful equaliser.

o-1 down at home and with just five minutes left to play, St Mirren midfielder Kenny McLean slung a deep freekick into the box and 19-year-old Paterson did the rest – cracking a wonderful acrobatic effort past the Georgian ‘keeper to level the score…

Sadly for Paterson and the rest of the Scotland U21 clan, the result really doesn’t do them many favours in their bid to qualify for the 2015 European U21 Championship – leaving them in fourth place in Group Three, three points adrift of joint-leaders Slovakia and the Netherlands (who have also played a game less than everybody else).