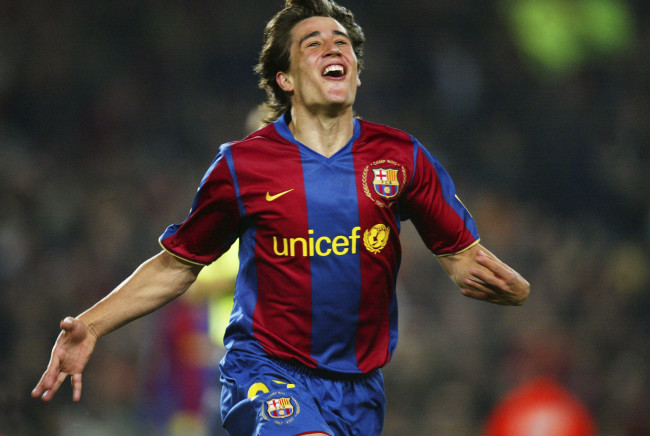 Bojan Krkic of Barcelona celebrates his goal during the La Liga match between FC Barcelona and Recreativo de Huelva, played at the Camp Nou stadium on November 24, 2007 in Barcelona, Spain.

The Times can’t get over it. Matt Dickinson’s interview with Stoke City’s Bojan Krkic is headlined:” “Boy wonder Bojan enjoys his return to café society …in Stoke.”

Bojan in Stoke is one thing. A foreign footballer in a Stoke cafe that doesn’t only offer tea you can stand your spoon up in and bread and dripping is a sensation to the London-based Times.

Bojan was destined for great things at Barcelona. Hailed the “new Messi”, Bojan, a product of the club’s La Masia, lost his way under Pep Guardiola, a man who once said of the prodigy: “There are only a few players who have a magical touch and Bojan is one of them.”

Bojan has talked about Pep before:

As a fan, Guardiola is the best coach in the world, but personal things that have happened to me [that] were hurtful. He was not fair with me on several occasions, and this is one of the reasons that I decided to leave.

Moves to Roma, Ajax and AC Milan were forgettable.

But the Bojan hype was based on something tangible.

At 17 years and 19 days on September the 16th, 2006, Bojan broke Messi’s record for the youngest player ever to play a league game for Barça.

On Being Young At Barcelona

To have started so young at such a big club. Special times…

I wasn’t playing regularly. A lot of things were different and it was difficult to face mentally because of my age. I was very innocent, naive. Playing in Barcelona at such a young age, you can be ready in football terms but not mentally. It’s hard coping with the impact of everything you do. Football is like a jungle and you have nothing to defend yourself if you are young.

On Being Loaned Out

I played as a winger and that’s not really my position. And I was on loan, so every summer I would be thinking, ‘What’s next? Where am I going?’ You don’t feel at home.

I came because Mark Hughes wanted me. And if he wants me, he must want to play football. I could have signed for clubs in Spain, in Greece, others in the Premier League, but Stoke had everything I was looking for. I’m playing in the best league in the world, the pitches are great, the stadiums are fantastic. The club take good care of the players. I feel settled. I didn’t necessarily feel that before.

I still have great possibilities and opportunities. But this time with more experience to handle them.

His youth was momentarily glorious: