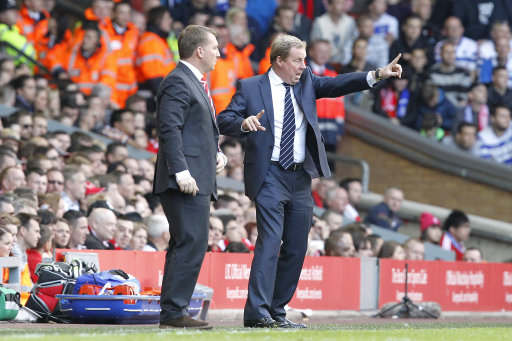 An horrific glimpse into what could’ve been

Harry Redknapp has a new book out (presumably it’s written like a two-year-old?) called “Always Managing: My Autobiography” and it’s currently being serialised in the Daily Mail.

It’s fairly common knowledge that Redknapp was, outwardly at least, in the running to get the England job after Fabio Capello was ousted in early 2012 though, much to the chagrin of every single buddyish journalist on Fleet Street who had been lobbying in unison for months to get their man installed, ‘Arry was thankfully passed over and the top job was given to someone who wasn’t and isn’t a cartoon character.

This obviously still rankles with ‘Arry, who obviously believes that the national game must be in the wrong hands:

“I wouldn’t trust the FA to show me a good manager if their lives depended on it. How would they know? What clubs have they ever run? Who do they speak to who really knows the game?

“This isn’t about them giving the England job to me or Roy Hodgson, but English football being run by people who really haven’t got a clue. And they get to pick the England manager!”

Redknapp also admits that, to combat England’s lack of style, he was planning to install then-Swansea manager Brendan Rodgers as his assistant as and when the obligatory call came from the FA:

“If I had become the England manager I would have taken Brendan Rodgers as my number two.

“Now we have Roy Hodgson who will keep England organised, for sure. I just hope he will also be a little bit bold, open up and try to get England playing the type of football we all want to see.

“Look at Brendan at Liverpool now – he still knows how he wants to play. He got rid of Andy Carroll because he wasn’t in that plan. That is how Spain operate: this is how we play and we don’t compromise.

“My thinking on Brendan was this: if he can do it with players from the lower leagues at Swansea what can he do with Rio and Terry or Rooney and Gerrard?

And Redknapp revealed that Rodgers was ‘up for it’ when he approached him with the idea.

“When Tottenham played Swansea on April 1, 2012 I pulled Brendan after the game and said that if all the speculation about me and England was true would he consider coming to the European Championships in the summer as my part-time coach?

“I told him I wanted England to play with as much technical ambition as Swansea. He was up for it.

“If I got the job, he said, he would speak to the people at Swansea to get their permission. ‘It would be a great experience for you, Brendan,’ I told him. ‘I want England to play like you play. Pass the ball, play and play and play.’

“It didn’t work out. On April 1, I was contemplating the way forward for England with Brendan Rodgers – and on April 29 the FA offered the job to Roy Hodgson.

“I’ll admit, I thought it was mine. Everyone seemed so certain, everyone I had met from all parts of the game seemed utterly convinced it was my job.”

“Everyone said I was the people’s choice, the only choice. All the senior players seemed to be up for me to get the job.

“I got quite a few text messages at the time from players saying they would love me to manage England: Steven Gerrard, Wayne Rooney, Rio Ferdinand, John Terry – but the FA went for Roy Hodgson to be the England manager, a man who is more their cup of tea.”

There’s more here (don’t worry, it’s not the Mail’s site) if you wish to sit through it, taking in yet more mithering over “safe option” Roy Hodgson and the mere 16 million reasons why the FA weren’t possessive of the balls to negotiate with Spurs and Daniel Levy over his release, etc, etc.

Frankly, we just can’t bear to read on. The overriding sense of self-entitlement is utterly nauseating.