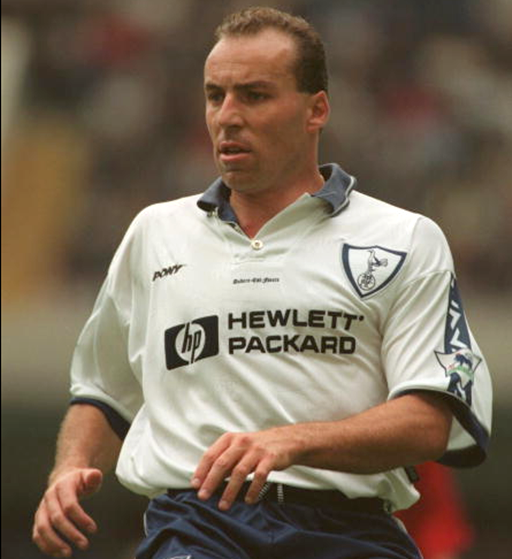 Once memorably described as “a rogue rocket waiting to be aborted by mission control” by The Guardian’s David Lacey, Ronnie Rosenthal twice achieved cult status at Tottenham Hotspur.

Signed from Liverpool for £200,000 in 1994 by then-manager Ossie Ardiles, Ronny soon became the one spark of passion in a club bled of most of its personality and spirit by the combined efforts of Ardiles’s successor Gerry Francis and chairman Alan Sugar.

Often brought on as substitute when Plan A, such as it was in those days, failed, Ronnie’s infectious enthusiasm would at least get the crowd going. He was very good at running in straight lines and cannoning off shots that ended up anywhere but in the net.

As that was often about as entertaining as it got, he became a bit of a cult hero at a time when other members of the team were called something vaguely similar sounding but not nearly as complementary.

Then came an extraordinary night at The Dell against Southampton in the FA Cup – and not just because Spurs were playing in their notorious ‘birdshit-on-the-shoulder’ away kit.

It was a competition the club had been kicked out of after being found guilty of making illegal payments to players. Sugar got the punishment quashed, but after drawing against the Saints in the fifth round at White Hart Lane, Spurs were 2-0 down at half time in the replay.

Francis threw Rosenthal on for the second half, and he scored a hat-trick of superb quality as Spurs went on to win 6-2. The first goal was a smartly taken finish from a Nick Barmby cross, the second a solo effort in which Rosenthal cut in from the right wing, beat two defenders and fizzed one of his rockets past Southampton keeper Bruce Grobbelaar, the third an absolute beauty of a 25-yarder that curled into the net.

Francis said he’d “never seen such an emphatic hat-trick”, while Rosenthal described the evening as his best moment in a Spurs shirt – his flurry of scarcely believable goals seeing him attain cult hero-dom among Spurs fans all over again.

And to finish up, because we’re legally obliged to do so, here’s that career-defining miss (Liverpool vs Aston Villa, September 1992) one more time…