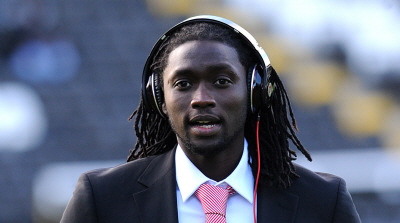 Lady in red, is dancing with me…

Bit of a double-barreller to get us off the mark this morning.

It seems that Birmingham are going to be a bit of a staple in this month’s transfer market after Blues chairman Carson Yeung’s strange decision to announce to all and sundry that they have a shedload of cash to burn. Reports today suggest that a £9 million slice of that pie could be spent on Sunderland striker Kenwyne Jones.

The rangy striker has only sporadically shown the form that sparked a flurry of interest in him last year but he has still managed to form a coherent and, more importantly, goal-scoring partnership with Darren Bent this time out, a partnership that Sunderland will surely be keen to keep together.

Nevertheless, the reports continue with news that if Birmingham do end up pinching Jones then Sunderland will replace the Trinidad And Tobago frontman with Schalke 04 striker Kevin Kuranyi who himself was a reported target for the Blues a matter of weeks ago. Some sources go as far as to suggest that Kuranyi will sign for the Wearsiders later today, regardless of the Kenwyne Jones deal, for around £3.5 million.

Not sure about this one to be honest. I can’t see Sunderland wanting to let Jones move on, especially after he signed a fresh four-and-a-half year contract in January and with the Trinidad man still at the club surely the acquisition of Kuranyi would be a mistake as the German forward is too much of a form player to be rotated constantly.

Any thoughts, Pies readers? Do you reckon Brum will get their man? And would a move for Kuranyi be a waste of time for Sunderland?