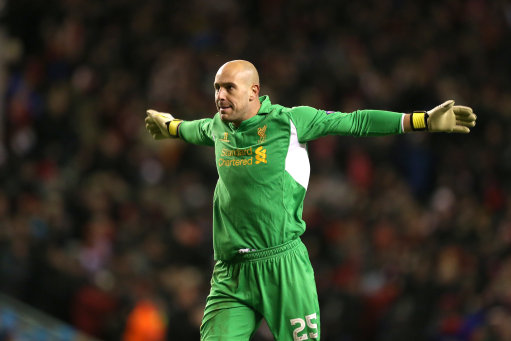 “GIVE US A GOODBYE HUG THEN!’

After eight long years at Anfield, long-serving Liverpool goalkeeper Pepe Reina is moving to Napoli on a season-long for 2013/14 after being bumped down the food chain by the arrival of Simon Mignolet from Sunderland.

As is the done thing with players these days, Pepe has penned a big, long old love letter to the Anfield faithful on his personal website entitled “Goodbye letter for Liverpool’s fans: Thanks for everything, I will see you soon” in his native Spanish tongue.

Here it is in full (and in English):

It is a strange feeling for me to think that next season I will not be a Liverpool player. For the past eight years, that is all I have known. The club, the staff, the city, the people and the supporters have played a massive part in my life. Liverpool is special in a way that only those who are lucky enough to experience the club close up can understand. It has given me memories that will live with me forever and friendships that will last just as long.

But more than anything else, it has given me an understanding of what it is like to play for the most wonderful English club. I may not have won as many trophies and medals as I would have liked since joining in 2005 but the experiences I have been a part of are as important as any silverware. I now understand how supporters can lift a team and inspire them to do special things. I appreciate that there is something unique about Anfield and the atmosphere it creates. I believe that anything is possible no matter what the situation is because at Liverpool there is no such thing as a lost cause. And I have been humbled by the fight for Justice for the 96 which showed me that the Liverpool people will always fight for what they believe in.

I know that I have been blessed to be part of a Club like that and I hope that in return I have always given my best and represented Liverpool in the right way. There have been good times and bad times but no matter what the situation has been I hope that my passion has been clear. I have been asked what my favourite Liverpool moment was and if I had to pick one it wouldn’t be a save or winning a trophy. It would be my celebration against Manchester United when David Ngog scored a late goal. That is probably the quickest I have ever run in my life! It shows what playing for Liverpool meant to me and also that there was nothing better than winning a big game at Anfield. I used to look at the Kop when we scored those kind of goals in big games and I would be jealous of the supporters going crazy. If the closest I will get to that is running the length of the pitch and jumping on my team mates backs then that will do for me.

Obviously, I won’t be able to do that next season but I hope that the supporters and my team mates will be able to enjoy many more moments like that. They deserve the best of times and it would give me so much pleasure to see Liverpool back where they belong, challenging for trophies and getting back into the top four. That was where the club was when I first arrived and although I am leaving a different club, one with new owners, a new manager, new players and new challenges, I honestly believe that Liverpool can reach those levels again.

I am disappointed that I will not be part of that and although it was not my decision to leave I will accept it just like I have always accepted any decision that Liverpool have taken for me. They signed me, picked me, gave me some of the best experiences of my life and looked after me. If they feel that the best thing for me and for them is for me to go on loan to Napoli for a season then so be it. Napoli is a new challenge for me and I know that the fans are just as passionate about their team as the Liverpool fans, so I am really looking forward to playing for them this season and I will give my all.

But if I have one regret, it is the way that I am leaving. It is only natural that I would be disappointed that the Liverpool management agreed to loan me to Napoli without telling me first, I thought that I deserved better than that even though I understand that difficult decisions have to be taken in football. A lot has been made about me informing the club that if an offer came in from Barcelona that I would have liked them to consider it. But I had also spoken to the club about the possibility of extending my contract if the offer was not made. I told the manager that I wanted to play for Liverpool and that Barcelona would only become an option for me if the opportunity arrived, like the rumours said it would, as it would be a chance for me to go back home. When it didn’t come I was happy to fight for my place so I was surprised that Liverpool decided it was in the club´s interests to send me to Napoli instead.

None of this will change my feelings for the club or the people in any way and now I have to look forward to a new challenge with Rafa Benitez, who I consider to be the best manager I have worked with, and I am fortunate to be going from one great club to another. Napoli remind me in many ways of the Liverpool I found in 2005, in all the affection they have shown me on my arrival, in having an ambitious project, even in coinciding and working with Benitez again…This memory which in part unites me with you, makes me happy and feel very motivated to begin this new project.

This is my chance to say thank you to everyone for everything that you have given to me and to my family. My children consider Liverpool to be their home and hopefully their love for the city and also for the club will only grow while we are away. I would have liked to have been able to say goodbye in a different way but because of the way the move came about this was not possible.

Maybe in the near future I can do it properly so that I can show my appreciation to you but all I would ask now is that you keep on inspiring the manager and the players just like you always have done and help Liverpool to become the club that you deserve once again. I would like nothing better than to come back at the end of my year away and for Liverpool to be back where they belong.

Thank you for everything. Good luck. I will see you soon,

Now there’s a man who obviously loves his football club – a love, we dare venture, is completely 100% reciprocated.

The little barb about “the management’s” slightly deceitful handling of his impending move to Naples is also rather interesting, no?