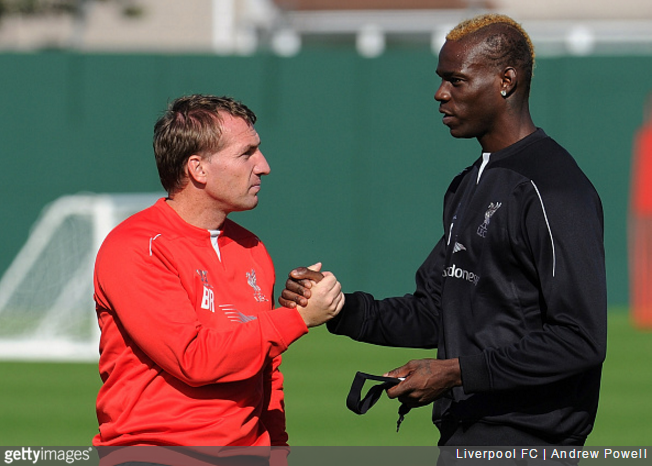 Football folklore is awash with stories of near misses when it comes to transfers that never came to fruition, with most managers able to list at least a handful of top talents they decided to pass on earlier in their careers. In fact, Arsene Wenger has amassed a healthy squad of nearly men over the years.

To that end, former Liverpool boss Brendan Rodgers popped in to the Goals on Sunday studio for a chat over the weekend, and revealed a couple of the big names he was chasing in the aftermath of Luis Suarez’s £75million departure to Barcelona – and the cut-price fodder he was fobbed off with after failing to land his first choices.

Discussing the shortcomings of Liverpool’s acquisition panel during his tenure, Rodgers said:

I managed the club how I wanted to, but there were other conditions that we could not get players that I wanted in.

The huge blow for us was that we thought we were getting Alexis Sanchez. We thought Luis was going and that he’d be a great like-for-like replacement.

He would’ve been perfect for us, how aggressive he is and how he presses the game. If we’d have got Alexis in after Luis going, it would’ve been a smooth transition – and we would bring in Rickie Lambert alongside him.

He then moved on to address the diamond-studded elephant in the room:

But we didn’t get Alexis Sanchez and, bless Rickie, there was a lot of pressure on him when really that wasn’t the plan. So we had to bring in someone. After the AC Milan game, I was asked the question and I felt Mario wasn’t someone who suited the profile of what we were after.

Mario has big talent. I wasn’t thinking I’d be any different in terms of managers who’ve had issues with him but, at that moment, we didn’t really have another option.

Come the end of the summer we were struggling to get in the type of player we wanted and the ownership thought this was a player I could develop.

They thought this is a £50million player that they can bring in for £16million, and I can maybe develop him how I developed a few of the other players.

It didn’t quite work for us and it cost us.

From Alexis to Rickie Lambert and Mario Balotelli in the space of a couple of sentences. Ouch.

Rodgers also mentioned in passing that Liverpool also passed on the chance to sign a promising young whippersnapper from the lower leagues by the name of Bamidele Alli:

[MK Dons coach] Karl [Robinson] had actually come on to me and said, ‘Listen, I’ve got a player Brendan, I think he is going to be fantastic. I’d love to see him at Liverpool.’

We watched him, looked at him and then I spent a couple hours in a hotel room with him.

He wanted to come to Liverpool. It was just then about getting the deal done with the club and unfortunately it never got done but at that point, that Saturday evening, we thought we had him in, it was done.

He stayed on then, the deal didn’t get done between the clubs and eventually he went to Tottenham, which was frustrating and disappointing really.

Close, but no cigarillo.