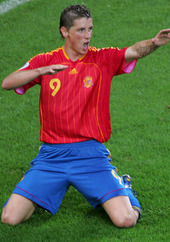 Fernando Torres is due to fly into Liverpool Airport today and undergo a medical before sealing a Â£27m transfer to Liverpool, from Atletico Madrid. The 23-year-old striker has cut short his summer holiday to ensure the move goes ahead without delay.
As part of the deal, the two clubs have also agreed for Luis GarcÃ­a to move in the other direction; Garcia played for Madrid during the 2002-03 season.
According to The Guardian, ‘Torres is expected to earn around Â£90,000 a week at Anfield, putting him in the same wage bracket as Xabi Alonso and Jamie Carragher but leaving him some way short of the club captain, Steven Gerrard, who earns a reported Â£120,000 a week.’
Our question to you is: with Torres in their squad, are Liverpool now genuine Premier League challengers to the big two of Man Utd and Chelsea?